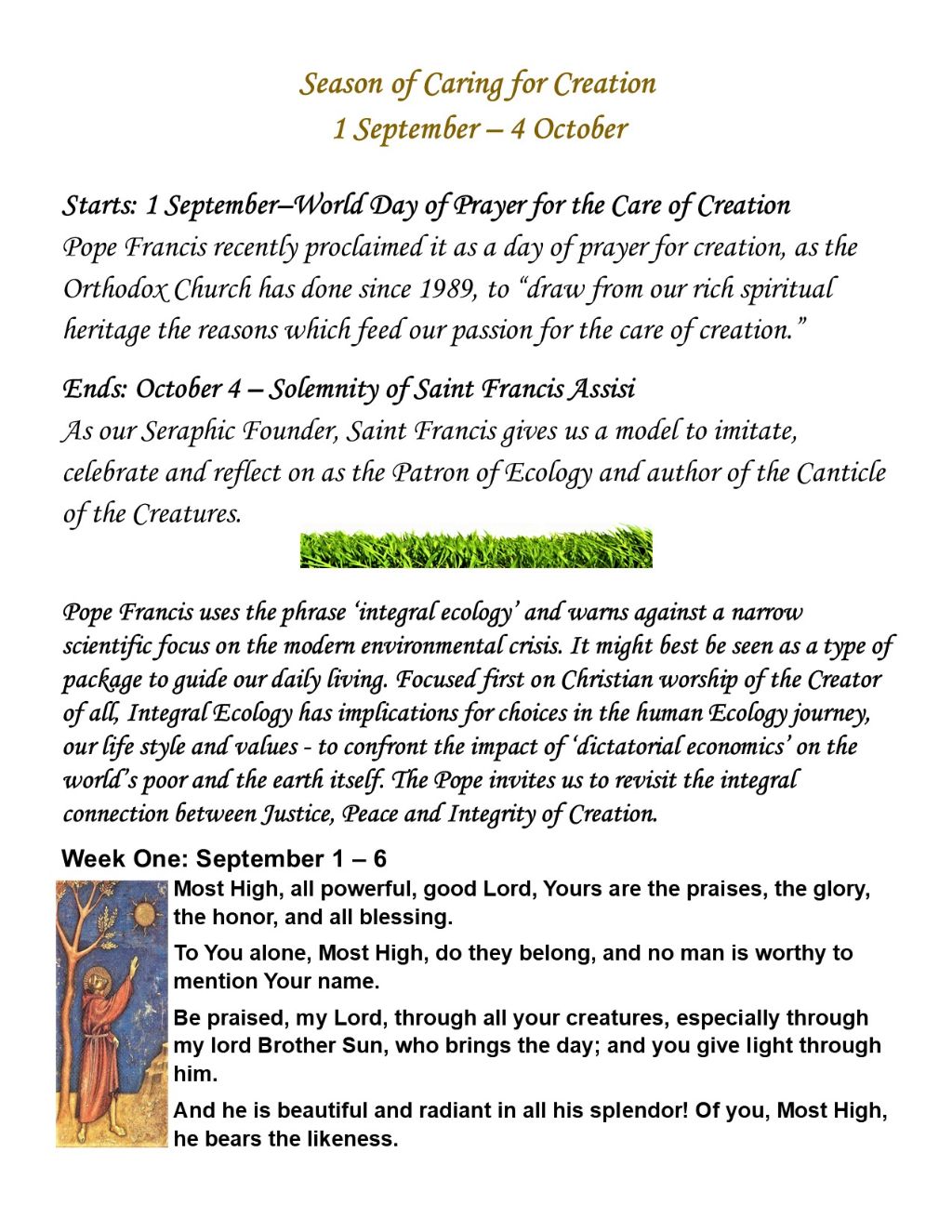 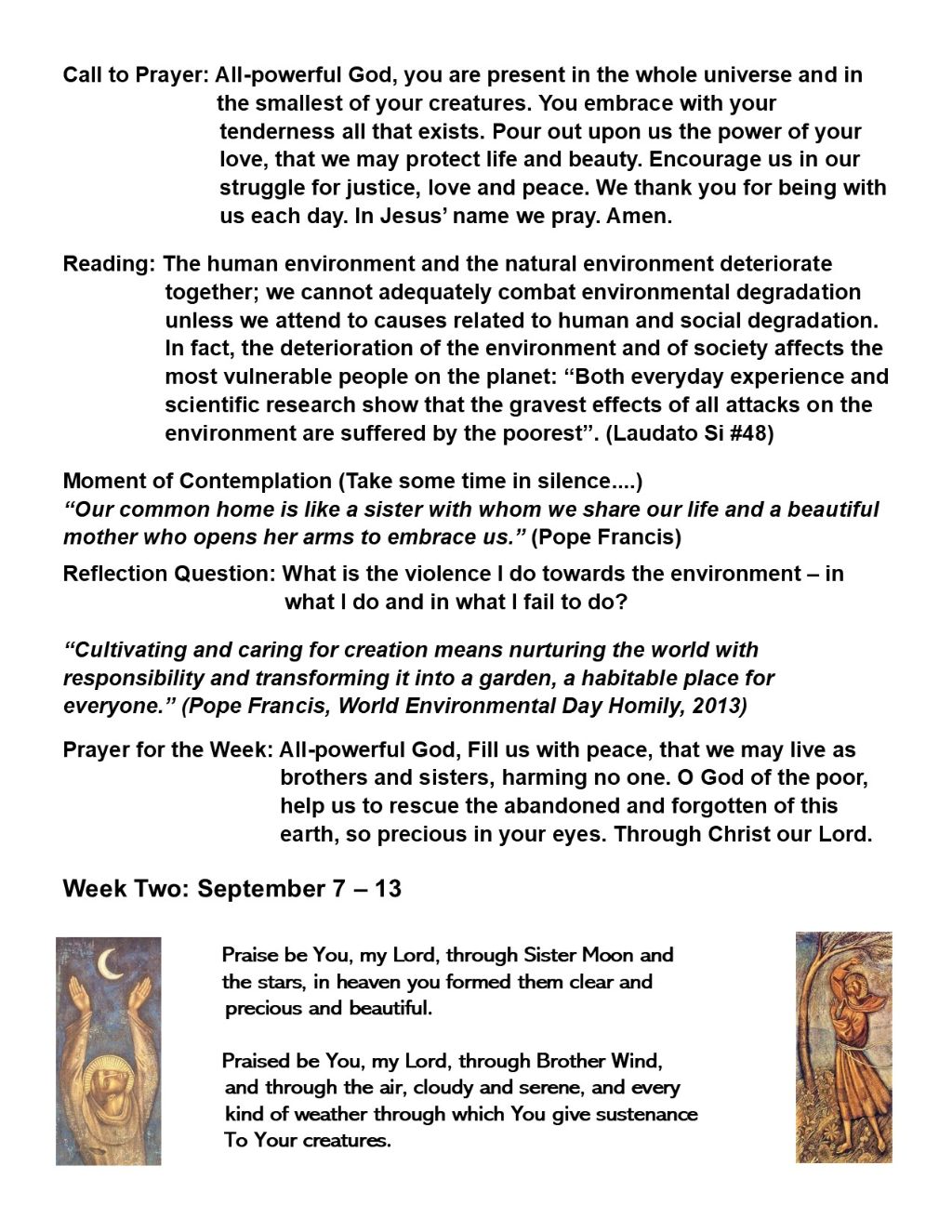 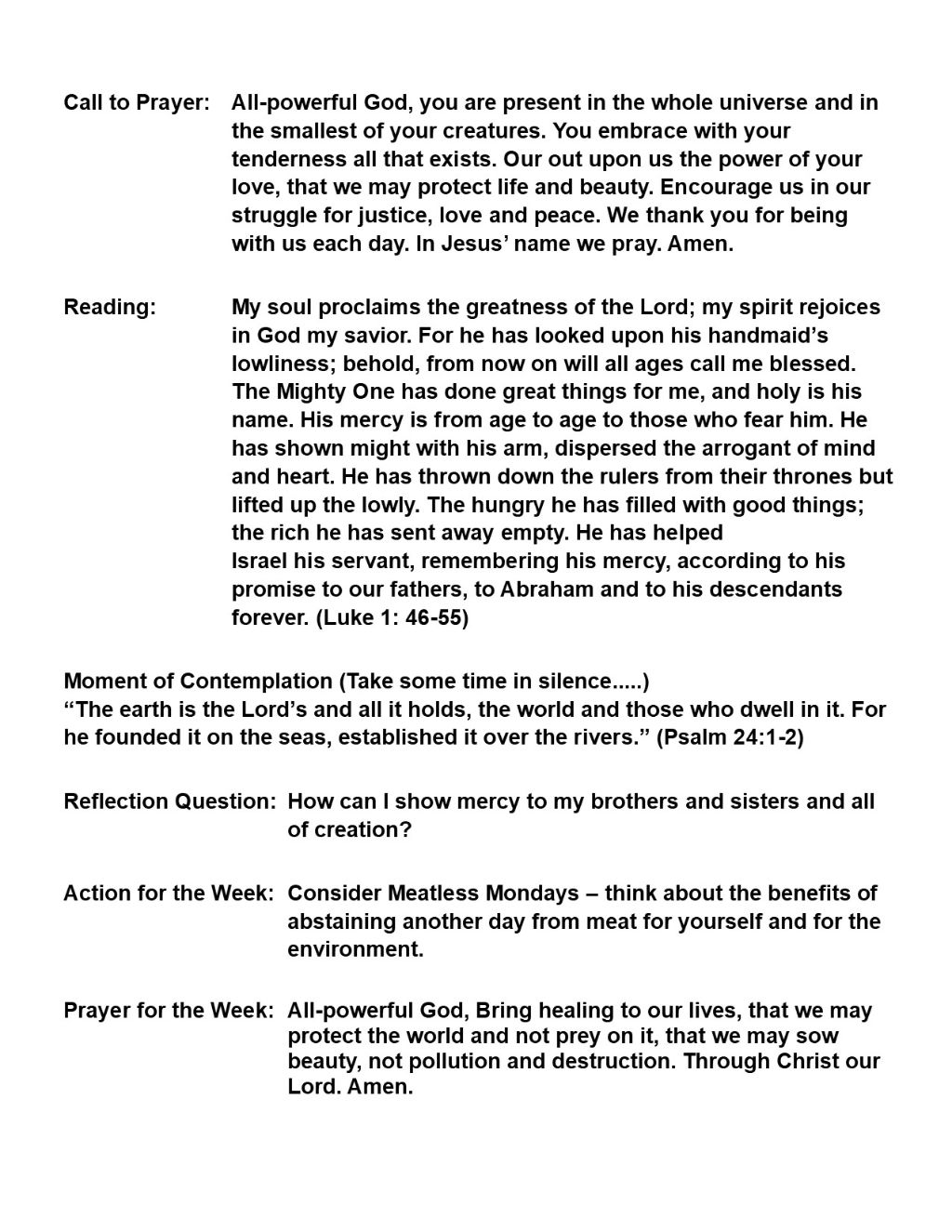 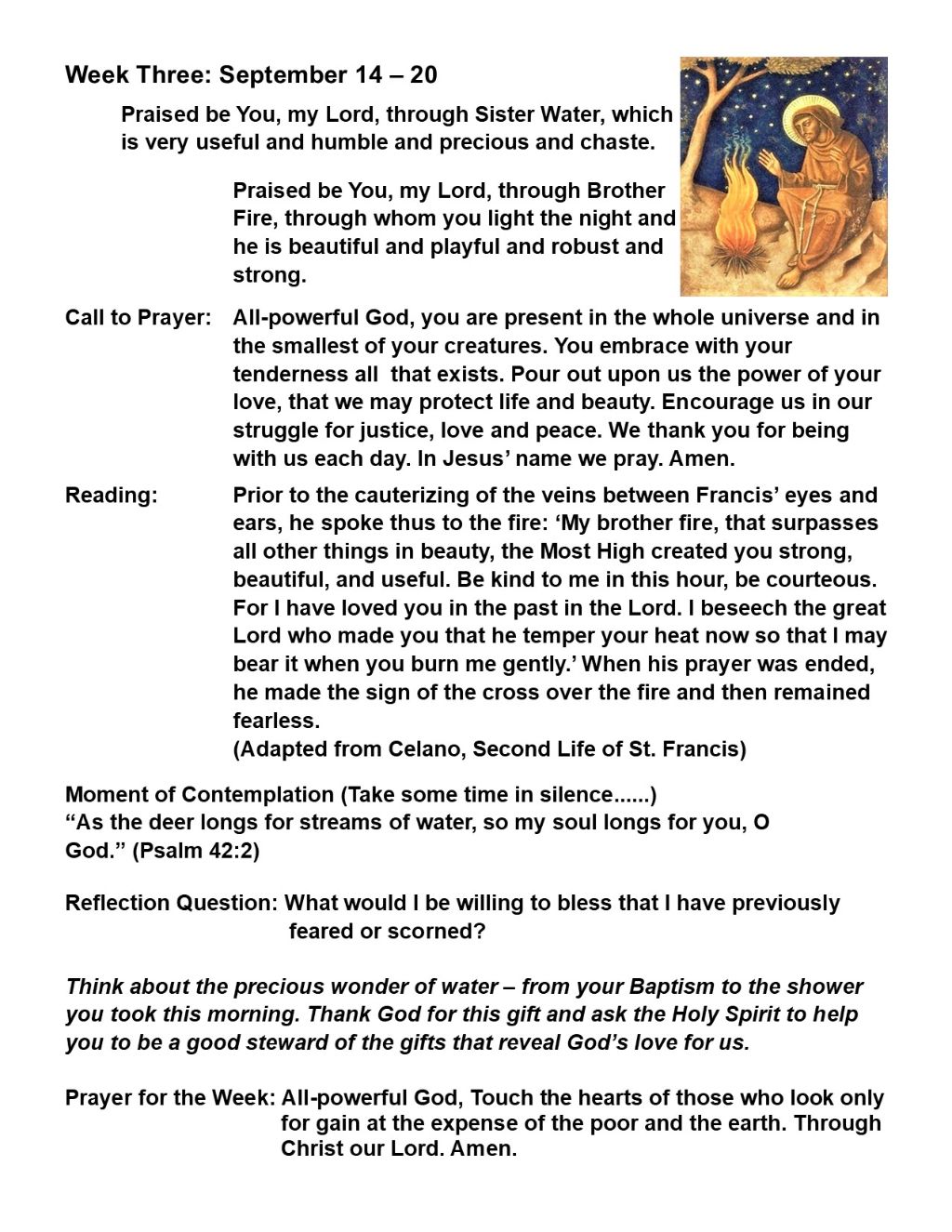 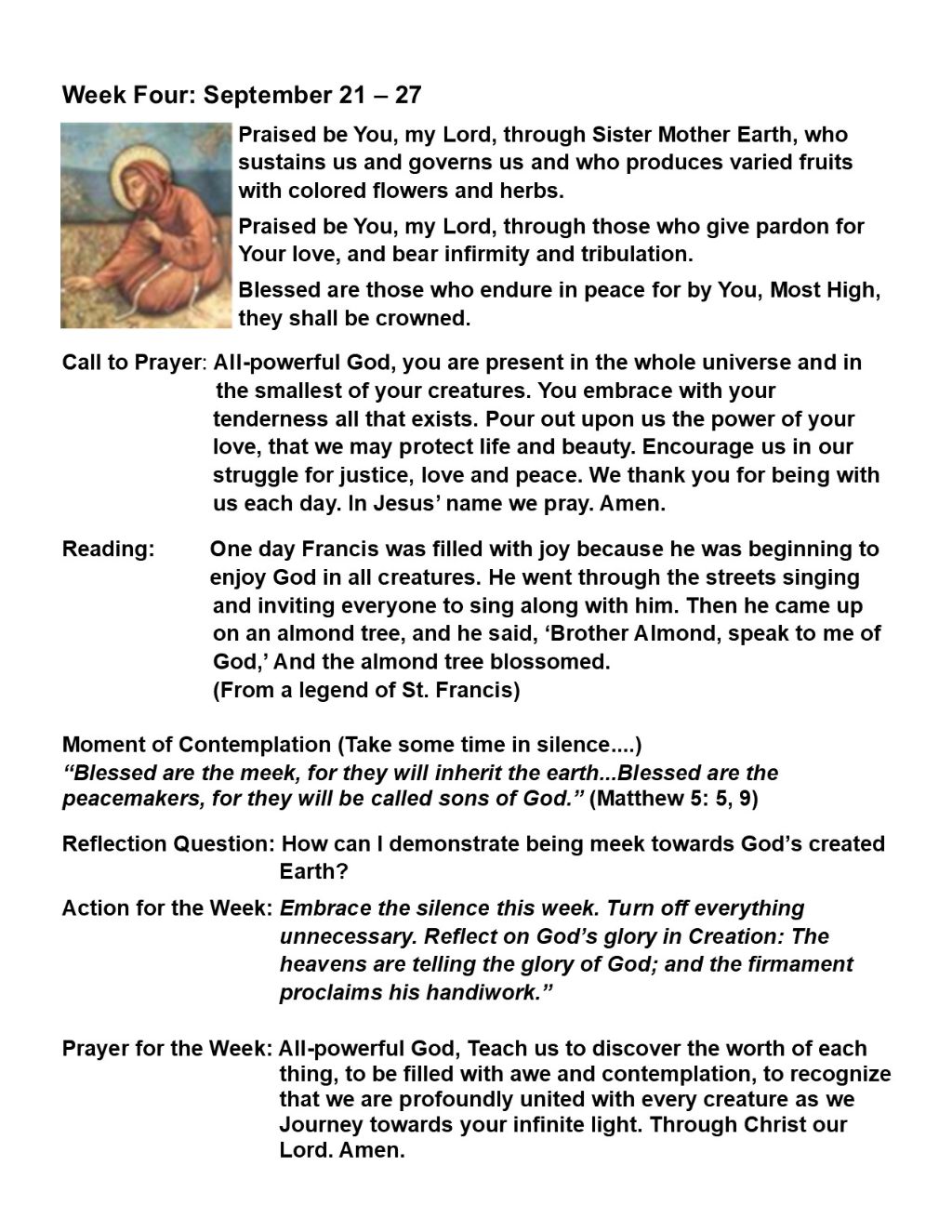 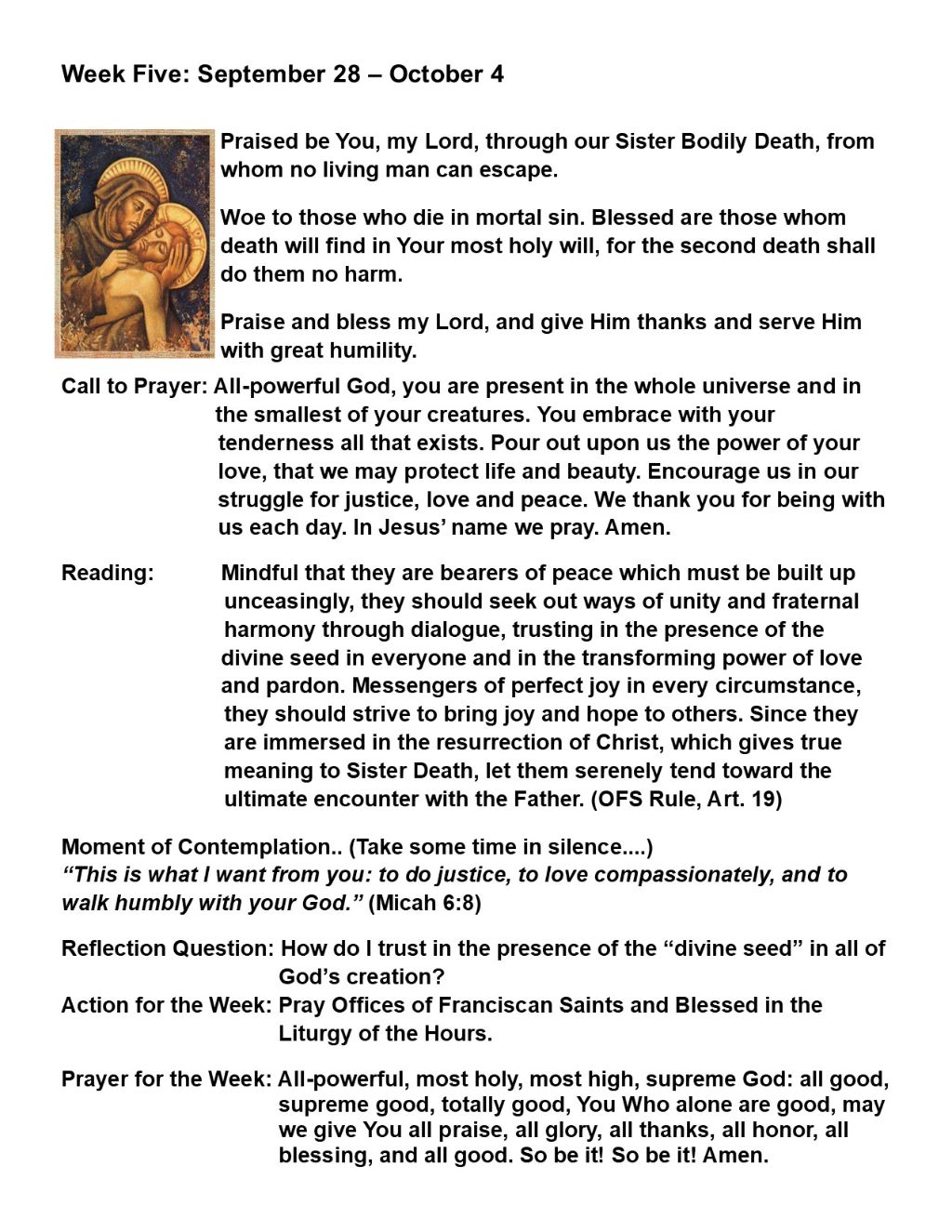 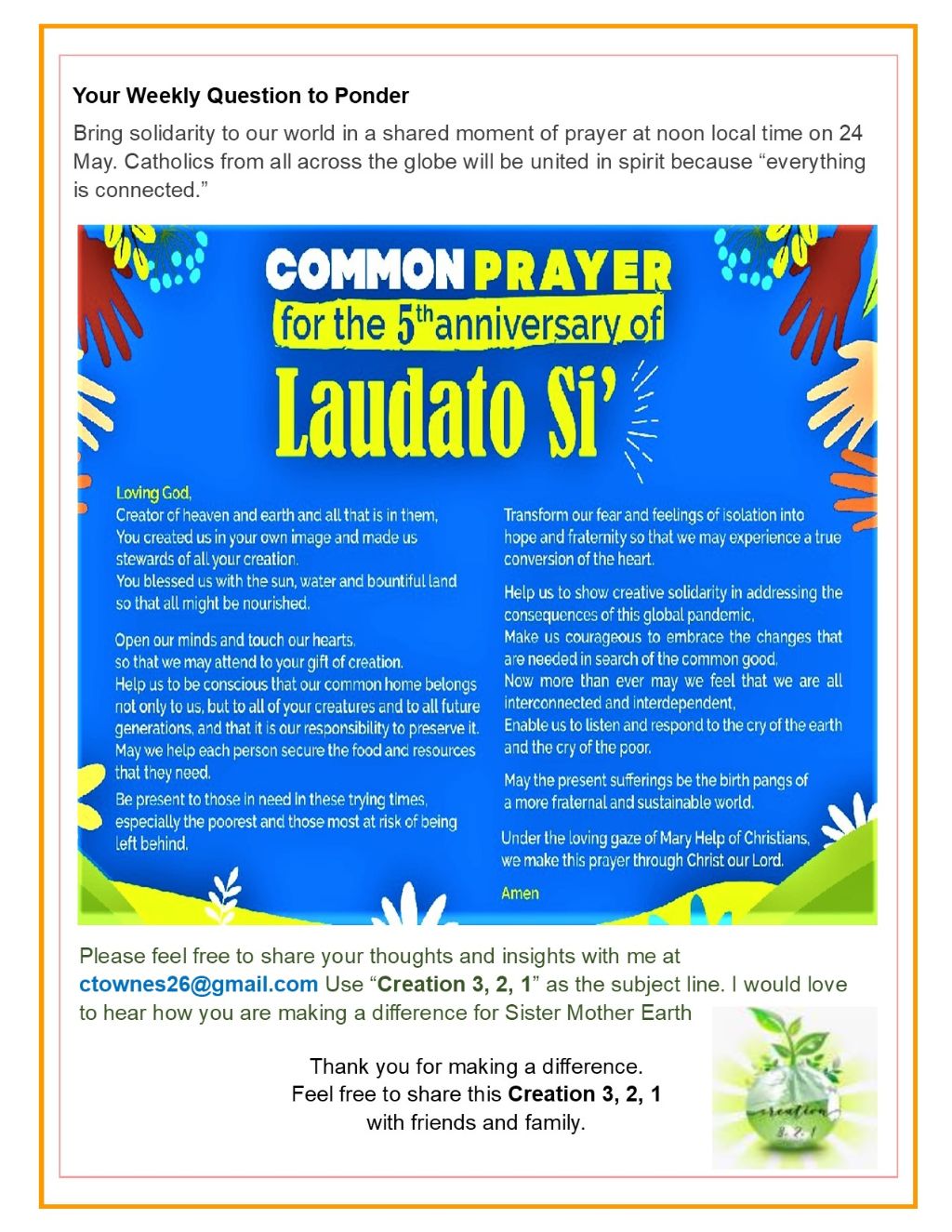 A message from our National JPIC Coordinator Carolyn Townes on the topic, Care of Creation. Carolyn includes prayers as well as actions to take to further our common concern for stewardship of God-given creation. 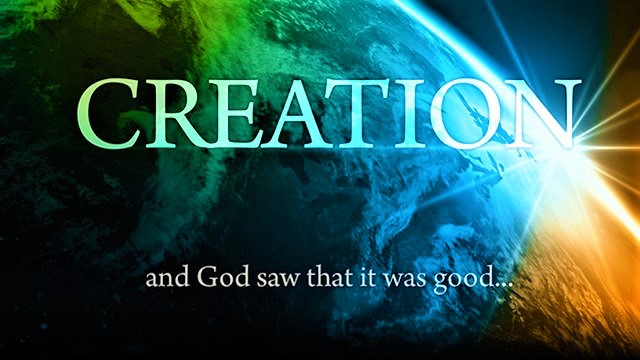 Message of the Holy Father Francis for the Event “Economy of Francesco”
(Assisi, 26 to 28 March 2020) 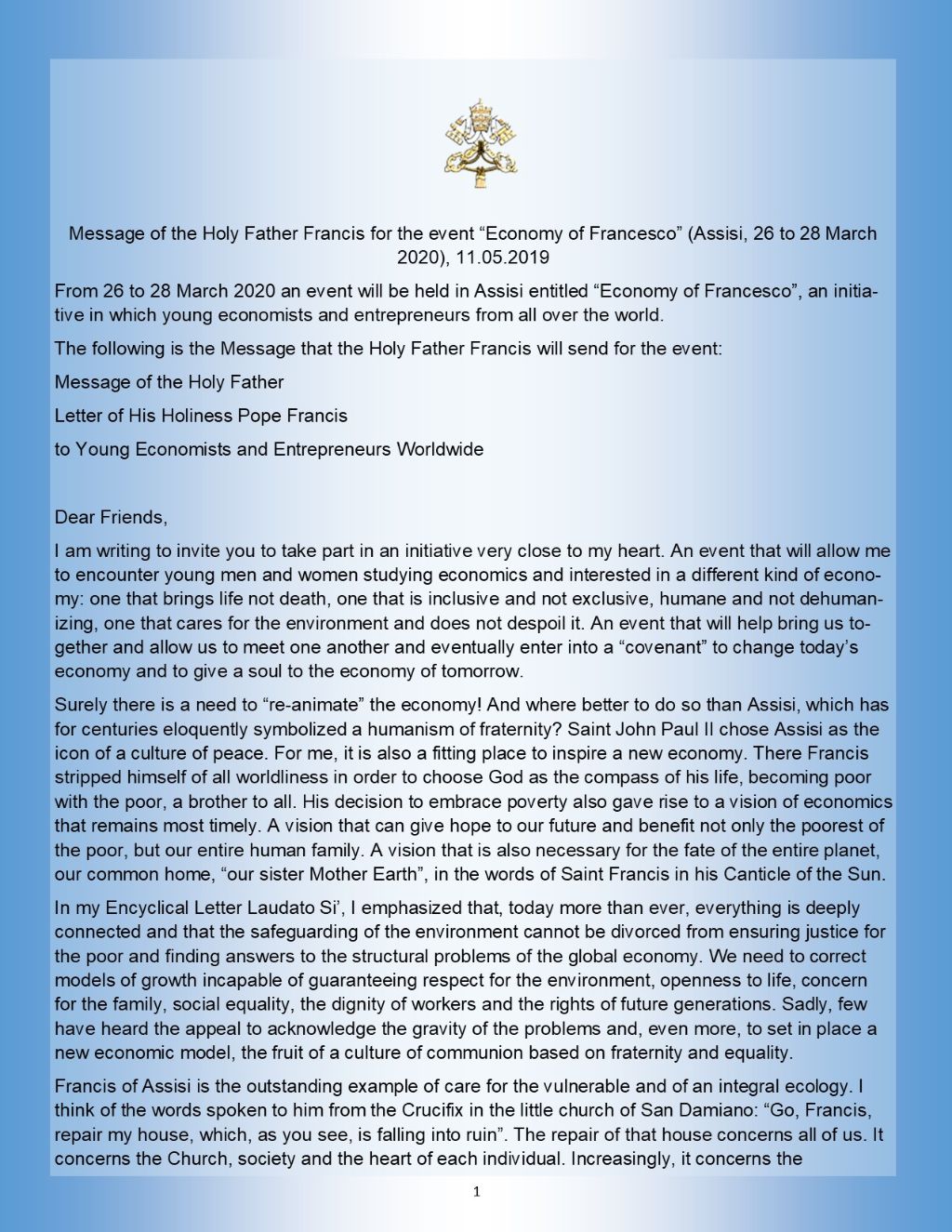 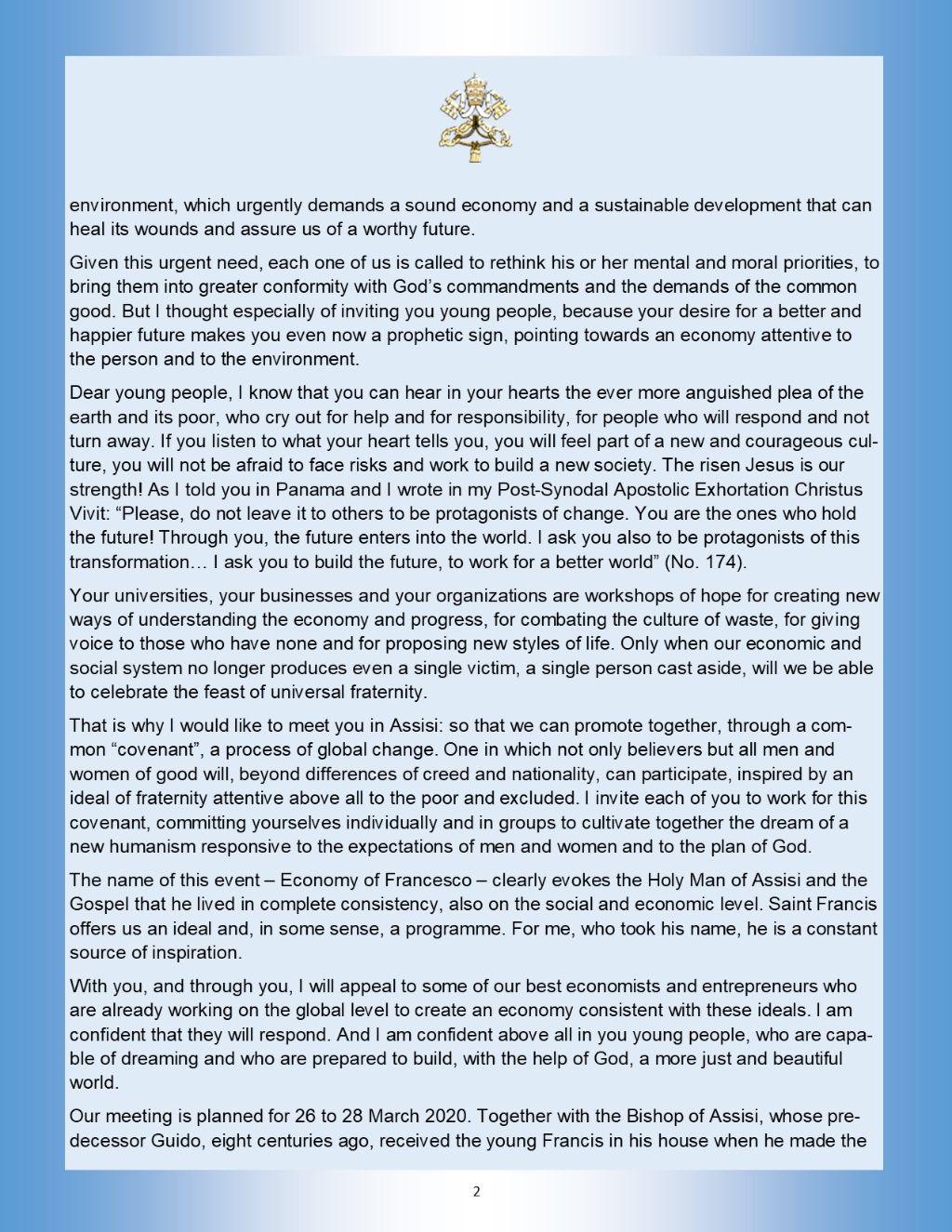 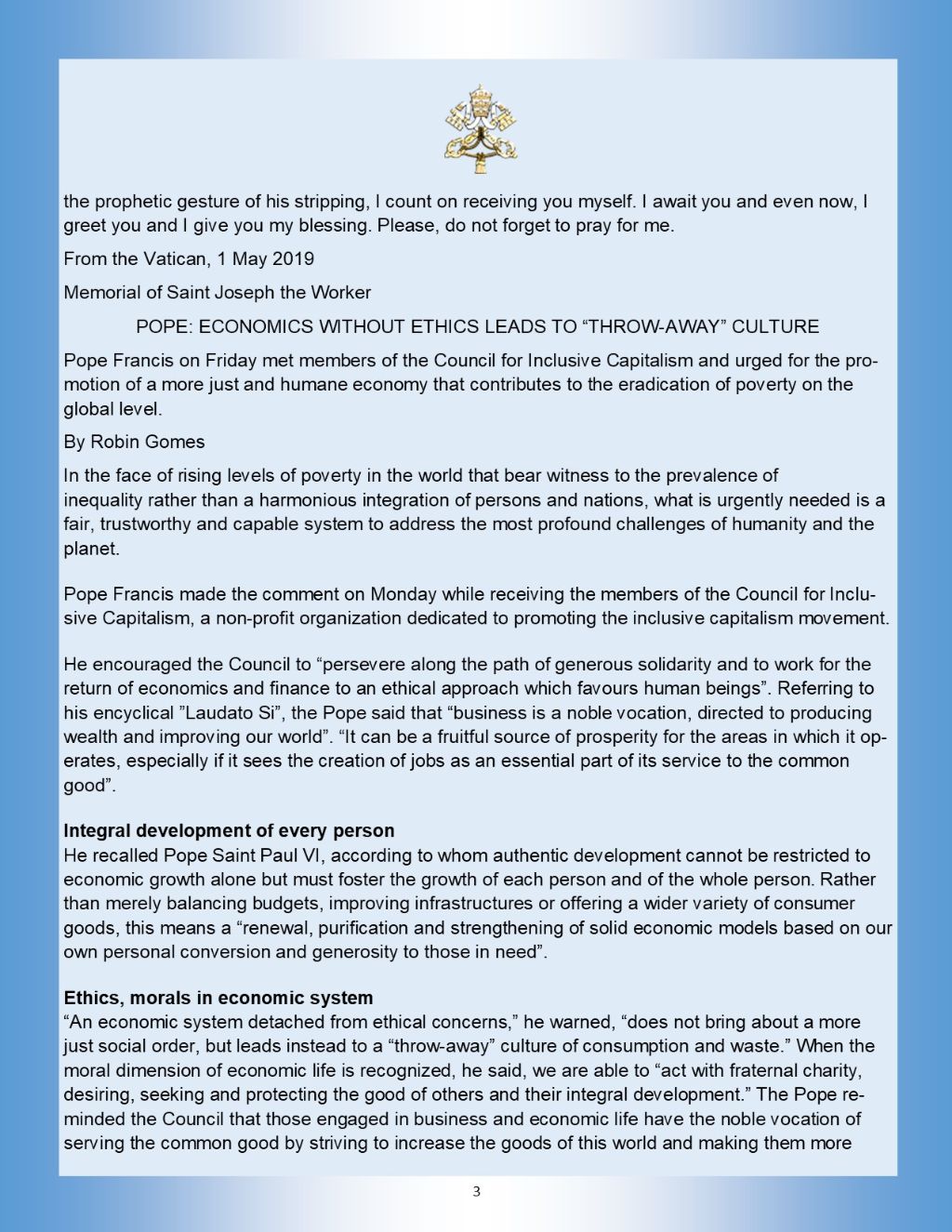 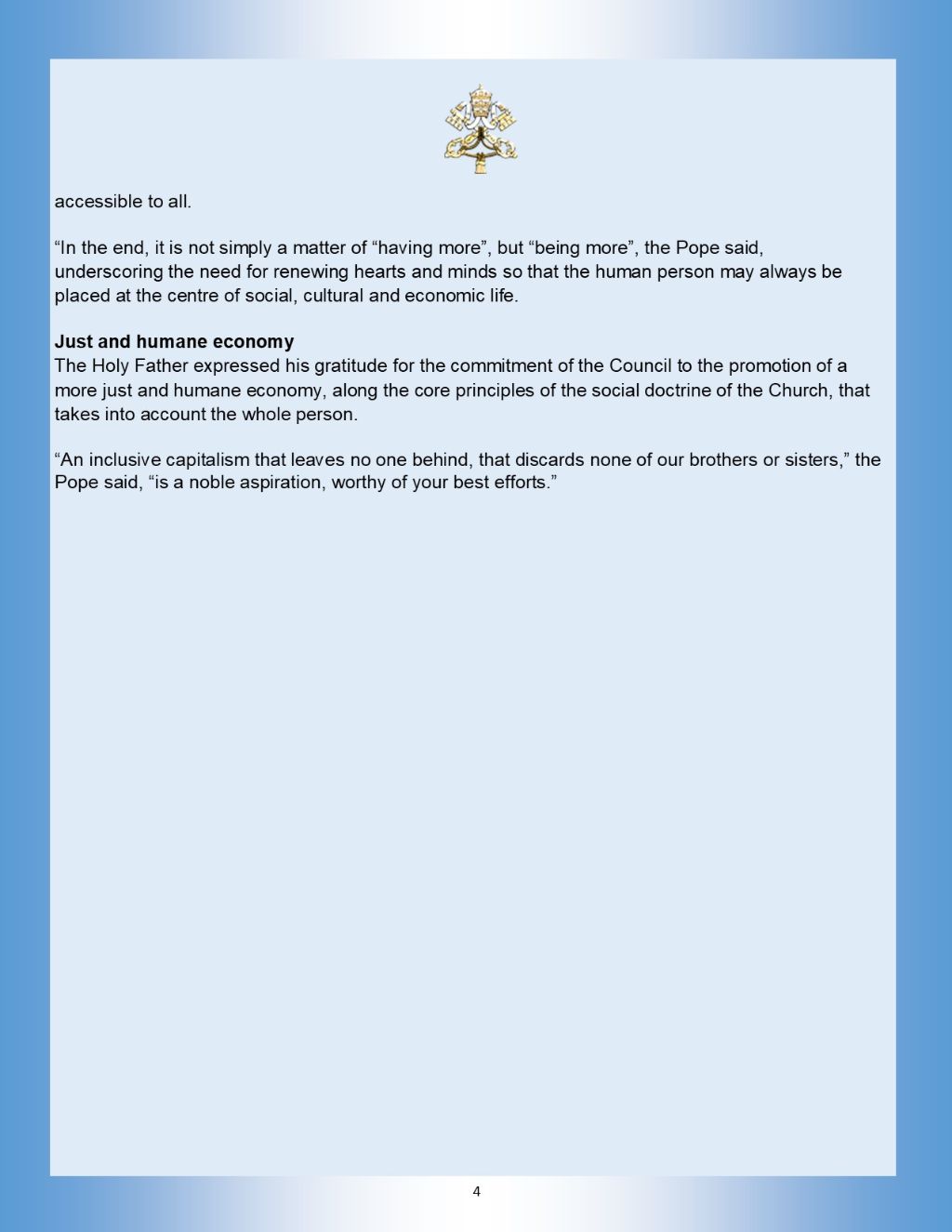 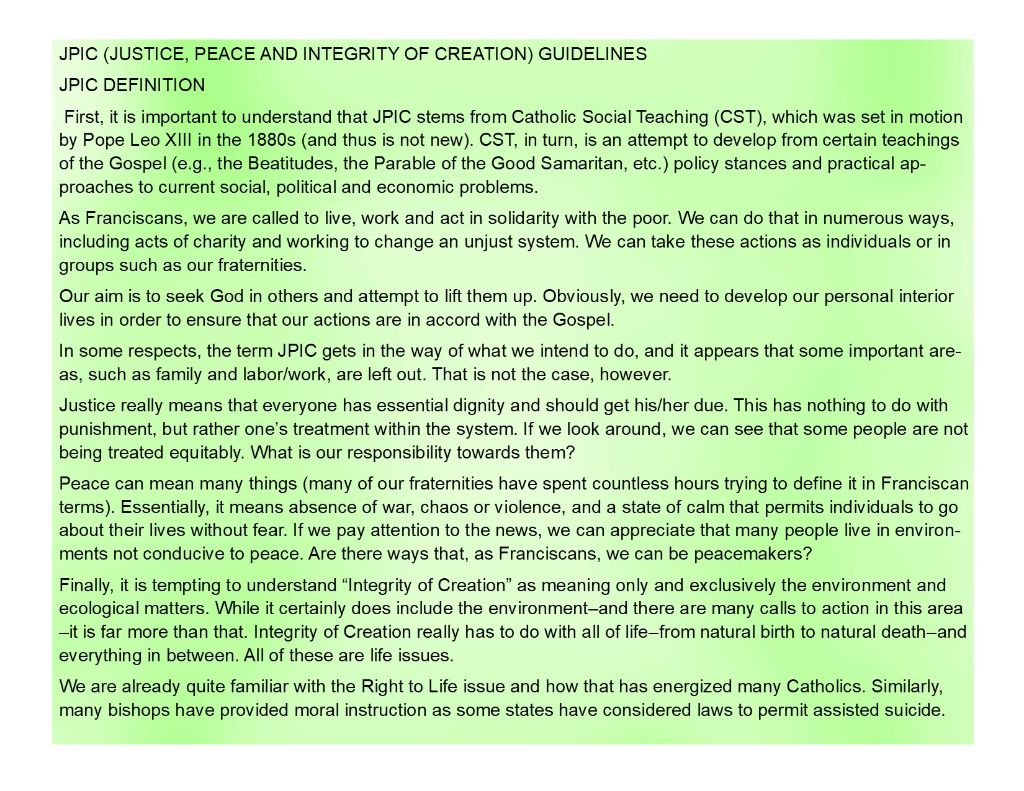 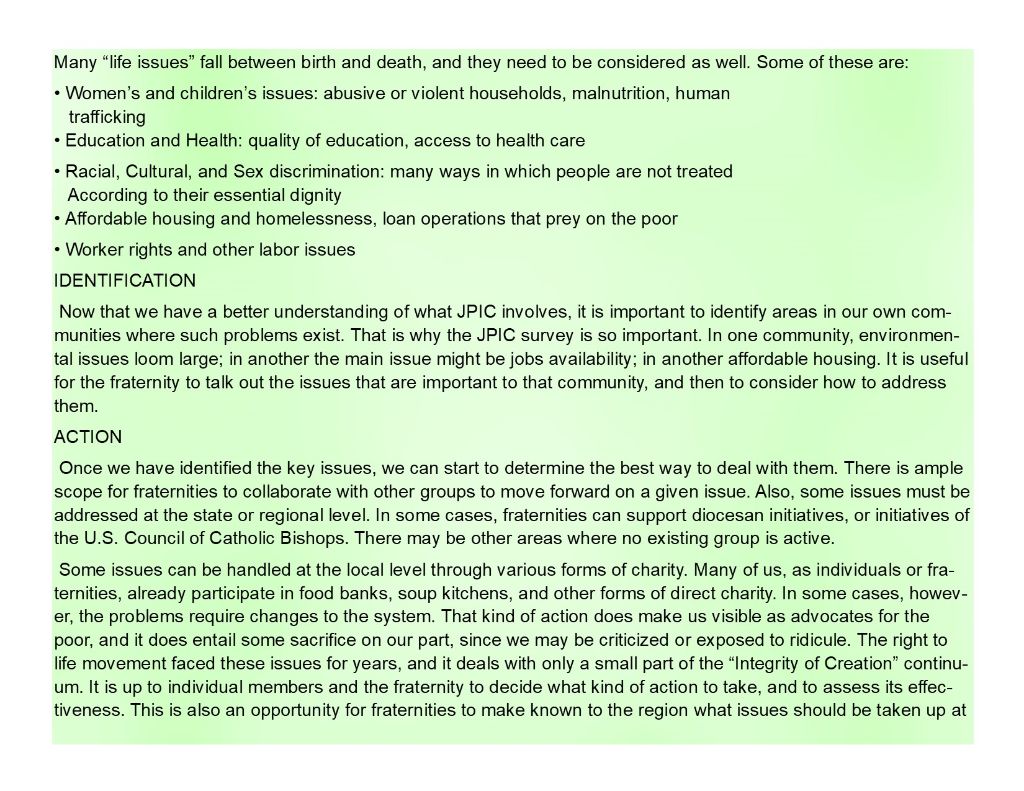 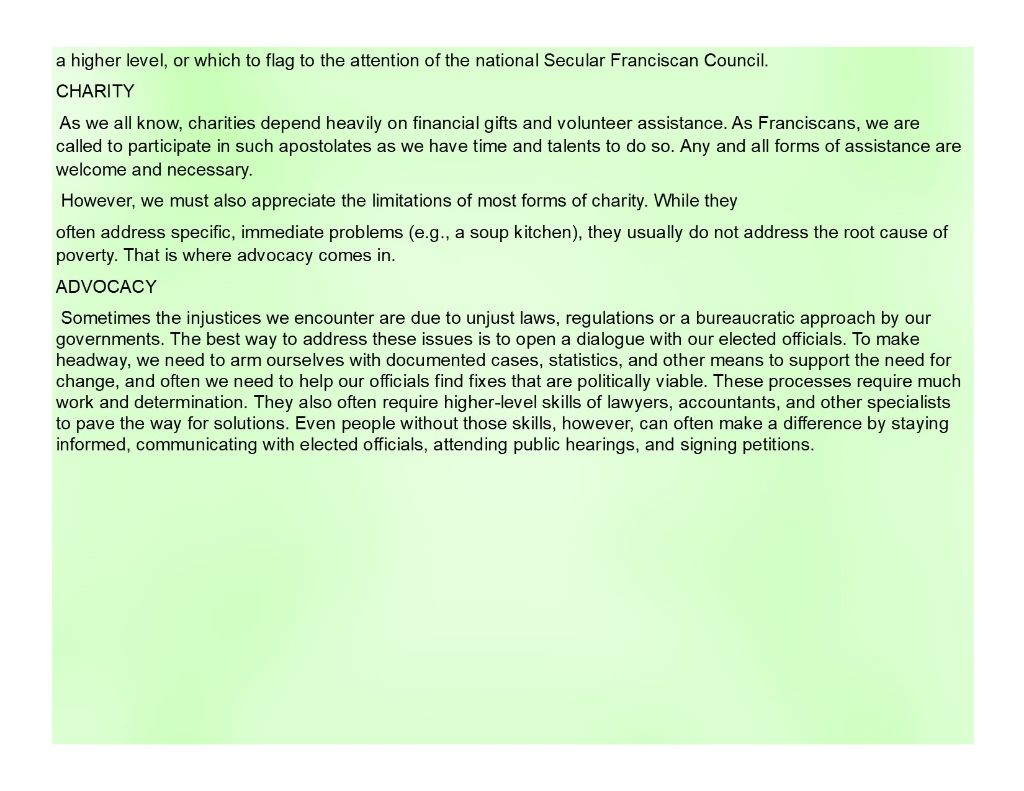 Many of us occasionally read secular literature for fun or relaxation. Even from such sources, we can glean useful insights and perhaps be inspired to rethink our practices and approaches to life situations. Three recently released books struck me as having much to add to help us recognize areas in our society that need to be addressed. While each of the authors is secular, not religious, each one is very concerned about justice, peace, and building a compassionate, non-discriminatory society. Here is a brief description of nuggets I found in each book.

Talking with Strangers by Malcolm Gladwell is a best-seller from a prolific, popular author. Gladwell reviews many academic studies examining how we determine honesty in others. Counterintuitively, we do less well when we know or have met the person. In dealing with bias, Gladwell discovers that people tend to “default to truth.” That is, we often prefer to assume the best, rather than the worst. He examines the impact of bias in several recent high-profile cases catching a spy, an American wrongly convicted abroad, and municipal police practices. In each case, preconceived notions on the part of the authorities all too readily led to judgement that was faulty. The bottom line is that we should not always trust our “instincts,” but rather give careful consideration in our judgement to other factors that could be operative.

The Guardians, a fiction book by popular author John Grisham, tells the story of a lawyer in the American south who attempts to exonerate people, mostly African-Americans, who have been sentenced to the death penalty for crimes that the lawyer believes they did not commit. The novel demonstrates how readily many aspects of our legal system conspire to rush to judgement and all too conveniently “put away” people assumed to be criminals, even when there is scant evidence against them. Although the book is fiction, several of the cases are similar to those we read about in the news. The process of freeing these prisoners is much more complex and lengthier than the original process to convict them. This should give us pause about the death sentence, and get us to rethink the operation of our criminal justice system.

To that end, I recommend a short book by a professor of constitutional law at America University, Robert L. Tsai. Even for non-lawyers, the book, Practical Equality: Forging Justice in a Divided Nation, is very readable. It reviews several historical and important supreme court decisions. Some, like Brown v. The Board of Education, furthered the cause of justice, while others, such as Plessy v. Ferguson, set it back. Tsai discusses the difference between “fair play” and “equality” in the court’s reasoning; in some cases, it is easier (politically) to seek a fair play solution than a “pure” equality one, which may have a wider impact than the court believes society can handle at the time. Tsai also notes the court’s use of various articles in the Bill of Rights to base their decisions on, including the important First Amendment guarantee of free speech. Tsai draws lessons from the oppression of emancipated slaves after the Civil War and the internment of Japanese Americans during World War II to suggest how the court could handle pressing contemporary issues, such as the rights of sexual minorities and the homeless, racism in the criminal justice system, police brutality, voting restrictions, and oppressive measures against migrants. This book underscores the real-world and continuous effort needed to move forward on justice issues impacting the vulnerable and marginalized in our society.

This message is being sent to the Ministers in the St. Margaret of Cortona Region. In addition to the members of the council, I have included the JPIC coordinators that I am aware of. Please send this message to those in your individual fraternities who would be most interested in JPIC issues.

RESULTS OF THE JPIC SURVEY CONDUCTED IN AUTUMN 2019:

Only about one-third of the fraternities responded to the survey. This was our first survey on JPIC issues and it served the purpose of starting a dialogue. There is a wide disparity in fraternities’ understanding of JPIC, and social justice issues in general, and there is greater interest in providing charity than engaging in advocacy.

Important issues at the fraternity level:

Issues referred to the regional and national levels:

Issues referred to the international level:

Peace building, concern about the impact of violence on those directly affected, and resolution of claims for reparations as a result of Japan’s use of comfort women in Korea (and elsewhere) during World War II

PAPAL ENCYCLICAL LAUDATO SI – Fraternities would greatly benefit from holding at least one session of ongoing formation on Pope Francis’ Encyclical Laudato Si. To facilitate that, I will send a separate e-mail containing the text of the encyclical as well as study guides to lead the reader through the document.

JPIC PROJECT – Fraternities are encouraged to set annual goals on identifying and carrying out a JPIC project. Fraternities that have completed a project will be asked to submit a brief description of it in May. The descriptions will enable us to share ideas with other fraternities and provide the basis for a JPIC program we can submit to the national council for their consideration of an award.

AVAILABLE FOR JPIC PRESENTATIONS – The regional coordinator is available to attend fraternity meetings and give a presentation on JPIC issues at their request.

JPIC Q & A SESSION AT MAY REGIONAL RETREAT – An optional informal JPIC FAQ and Q & A session will be held during the May regional retreat. This is an opportunity to receive some additional materials on JPIC and discuss programs and other matters.

Please feel free to contact me at any time.

Peace and All Good,