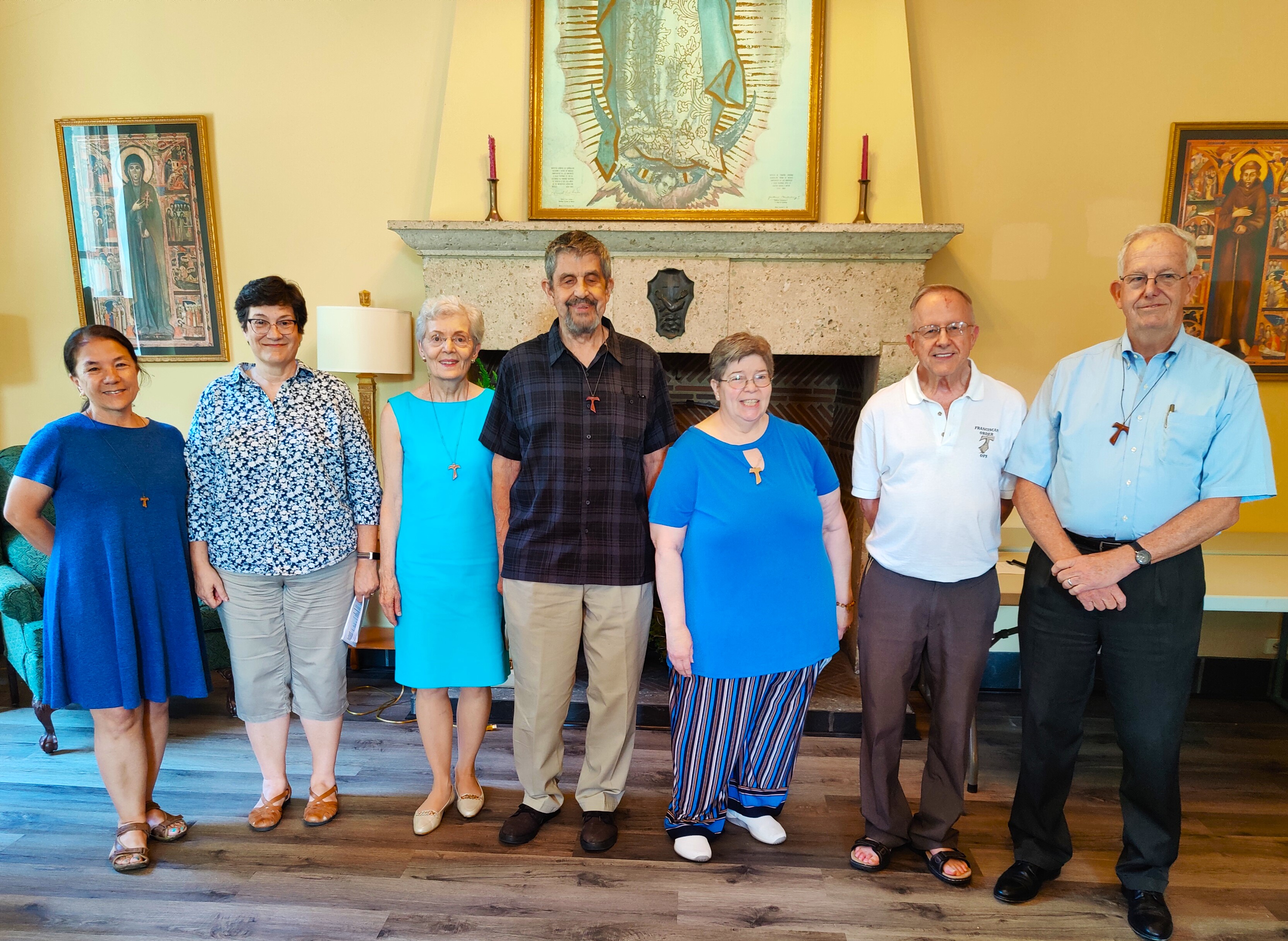 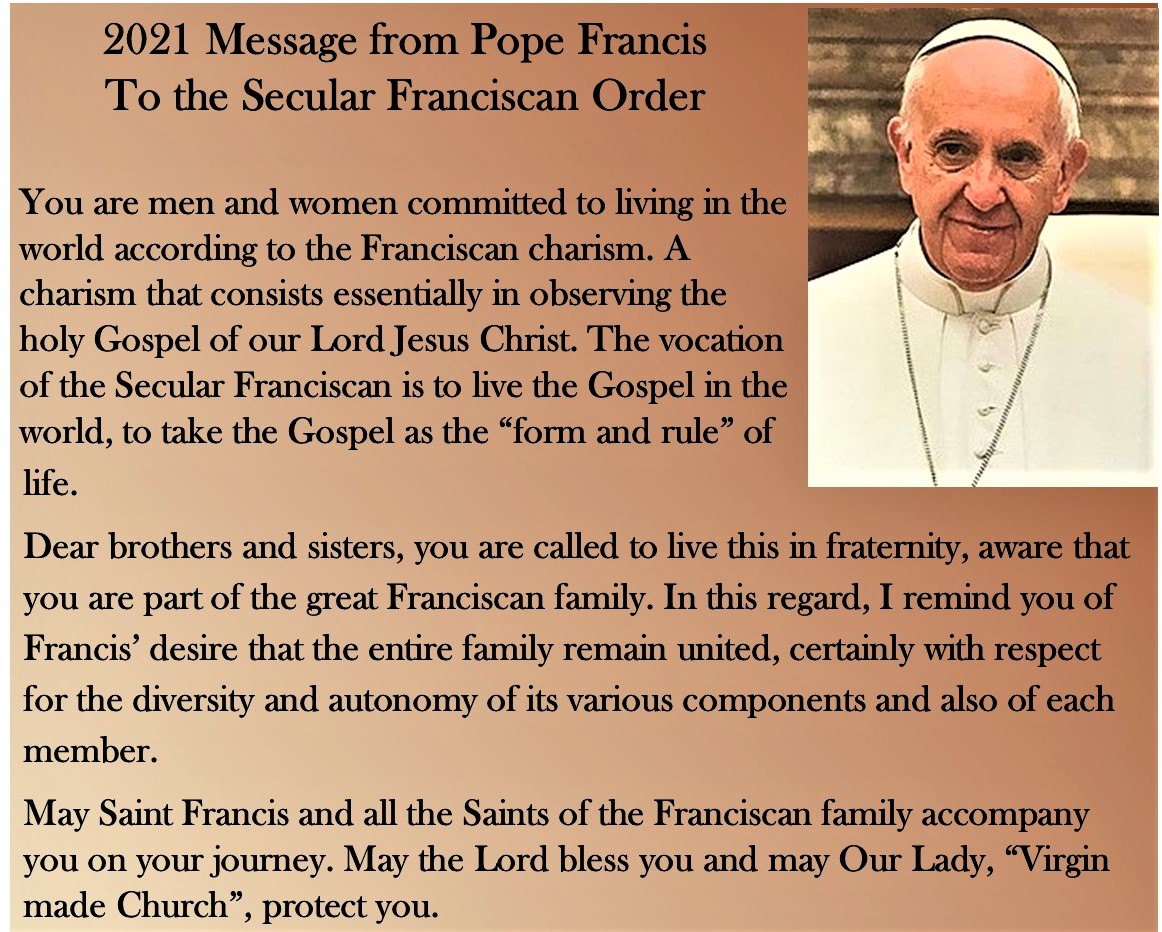 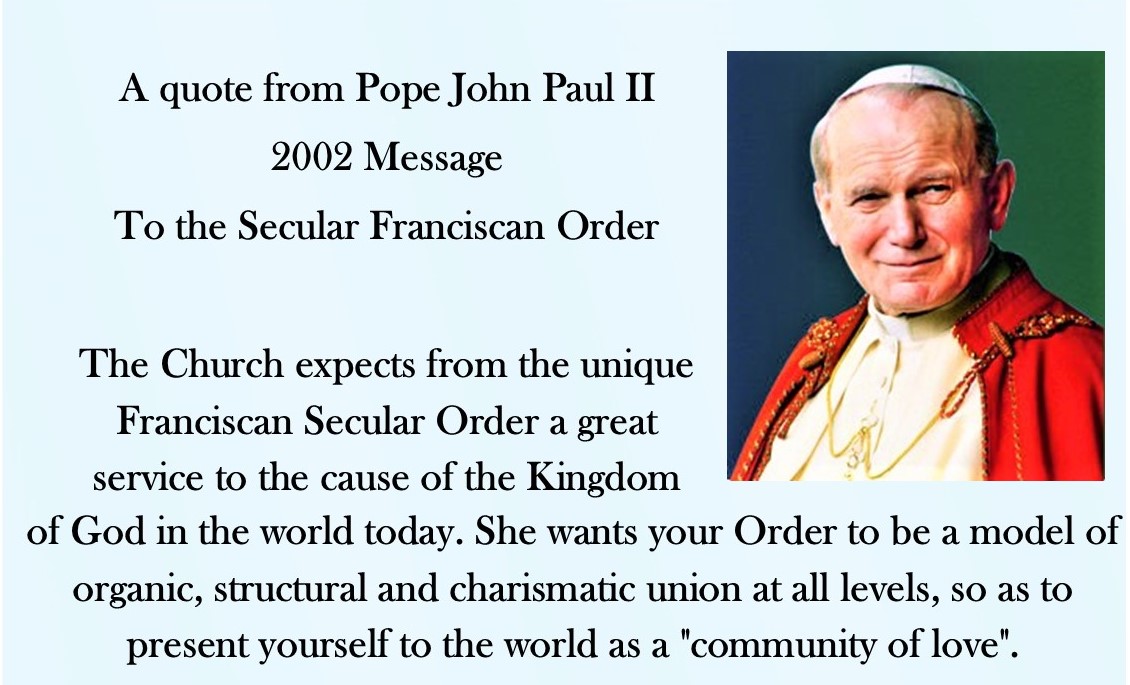 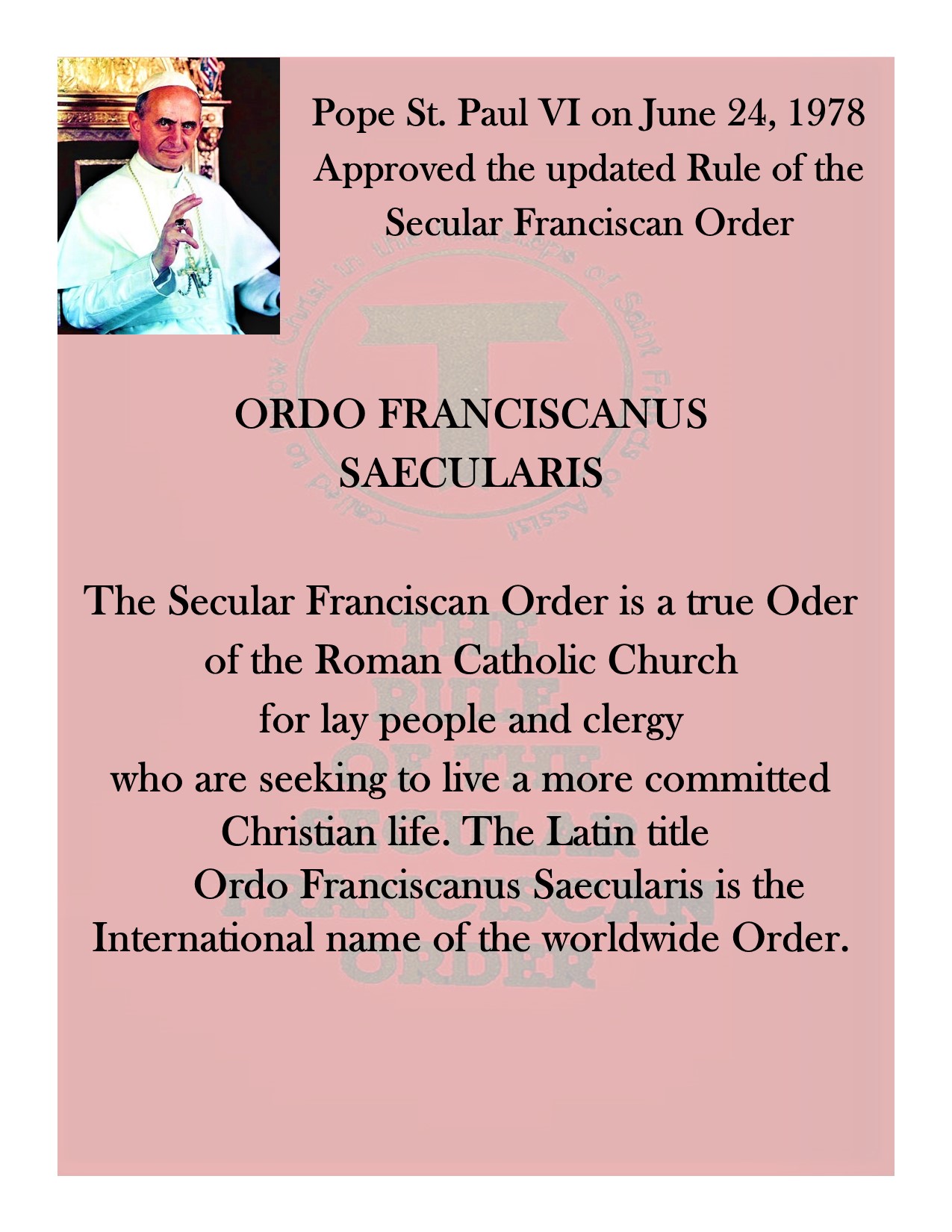 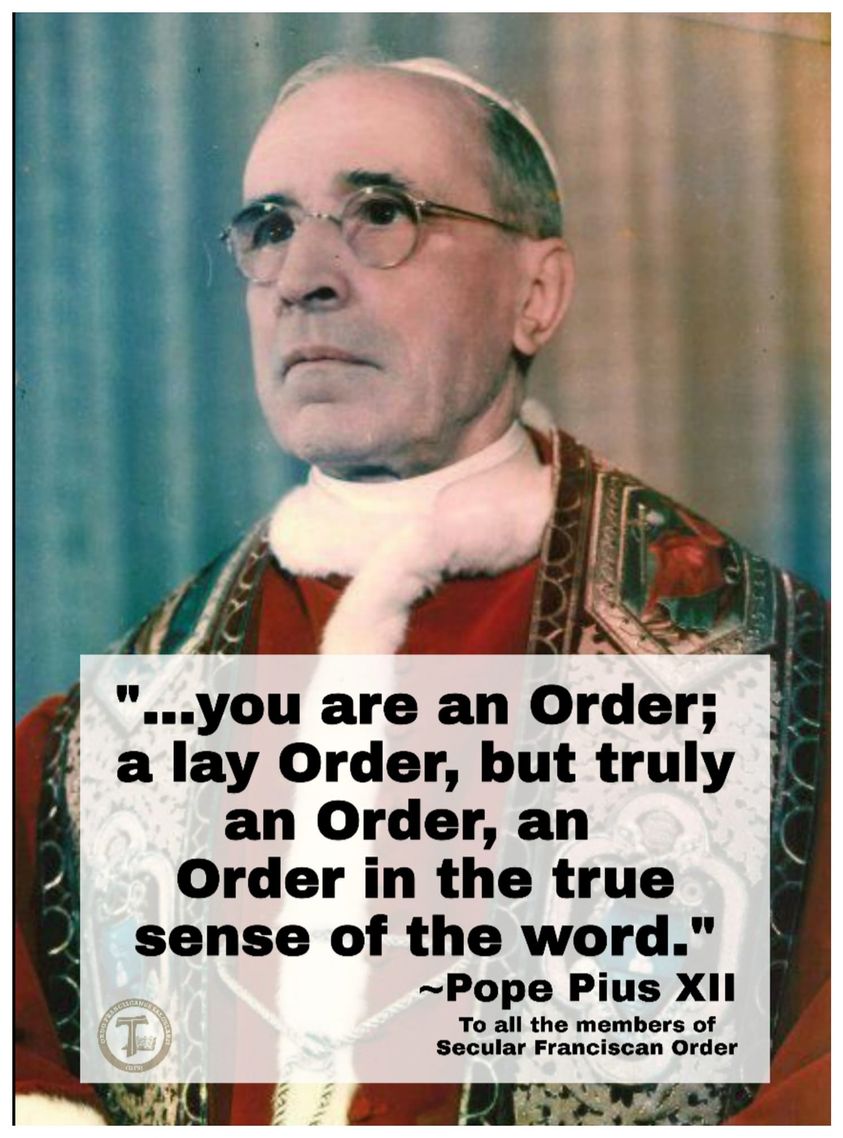 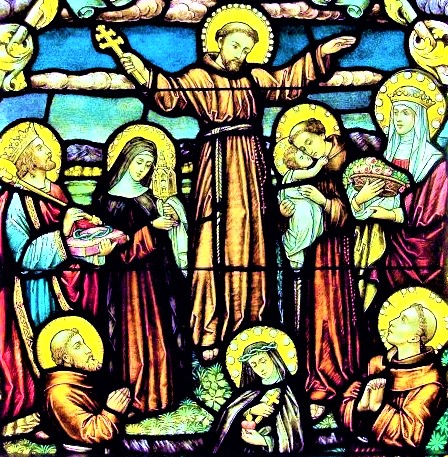 Do Secular Franciscans wear a habit?

Yes, Secular Franciscans do wear a habit, and we always have!

The first recorded reference to the TAU is from Ezekiel 9:4, “Go through the city of Jerusalem and put a TAU on the foreheads of those who grieve and lament over all the detestable things that are done in it.” The TAU is the last letter of the Hebrew alphabet and looks very much like the letter “T”.

The Tau cross (usually simple and wooden) is the official external sign or “habit” of the SFO in the United States. At the Fourth Lateran Council — at which Francis was said to be in attendance — heard the words of Pope Innocent III in his homily when he said, “The TAU has exactly the same form as the Cross on which our Lord was crucified on Calvary, and only those will be marked with this sign and will obtain mercy who have mortified their flesh and conformed their life to that of the Crucified Savior.  The Tau became the symbol for the council. From then on, Francis used the Tau in his writings, painted it on the walls and doors of the places where he stayed, and used it as his signature.  The TAU became Francis’ own coat of arms.

St. Bonaventure said, “This TAU symbol had all the veneration and all the devotion of the saint: he spoke of it often in order to recommend it, and he traced it on himself before beginning each of his actions.  For Francis, the Tau Cross also became a symbol of spiritual renewal in the Church.”

Due, no doubt, in large part to Francis’ own affection for and devotion to the TAU, it has been a well recognized and accepted Franciscan symbol among Franciscans of various denominations and of all orders within those denominations for centuries. It remains so today. The TAU carries with it all the symbolism of the Cross of Christ as well as Francis’ ideal of life and dream for himself and his followers.

With the revision of our Rule in 1978, our habit changed from the small scapular and string to — in the U.S., at least — the Tau cross.

It is most often found wooden, with a knotted cord. The three knots symbolize the religious solemn vows of Poverty, Chastity, and Obedience. Seculars do not make vows, but promise to live Gospel to Life and Life to Gospel practicing the secular version of Poverty Chastity and Obedience: Humility, Holiness and Charity.

The Conformity. On top of the Tau are the crossed arms of Christ and Francis, which is called the “conformity”. Christ’s bare arm is in front of Francis’ clothed arm; Christ’s hand has the wound from His Crucifixion; Francis’ has the stigmata.  – St. Thomas More Region

What is the theological explanation of the TAU?

The Tau is the last letter of the Hebrew alphabet. It was used with symbolic value since the Old Testament; talked about in the Book of Ezekiel: “The Lord said, Go through the midst of the city, in the midst of Jerusalem, and mark a Tau on the foreheads of the men that sigh and that cry …” (Ez.9, 4). It is the sign placed on the front of the poor of Israel, save them from extermination.

With this same meaning and value if it also speaks in the Apocalypse: “And I saw another angel ascending from the east, and bore the seal of the living God, and cried with a loud voice to the four angels to whom it was ordered to harm the earth and the sea, saying, damaged or not the earth, neither the sea nor the trees until we have sealed their foreheads the servants of our God “(Ap.7 0.2 to 3).

The Tau is, therefore, a sign of redemption. And ‘outward sign of that newness of the Christian life, the more inwardly marked by the seal of the Holy Spirit, given to us as a gift on the day of Baptism (Ef.1, 13).

But above all, the Christians adopted the Tau, because its shape reminded them of the cross on which Christ was sacrificed for the salvation of the world.

St. Francis of Assisi, for the same reasons, referred to the whole of Christ, the sign was very dear, so much so that it occupied an important place in his life as well as gestures. In him the old prophetic sign is actualized, you recolor regains his saving power and expresses the beatitude of poverty, a substantial element of the Franciscan way of life.

It was a love that sprang from a passionate reverence for the holy cross, the humility of Christ, continuous object of the meditations of Francis and for the mission of Christ, who through the cross has given to all men the sign and the expression of his great love. Tau was also for the Holy concrete sign of the sure salvation, and Christ’s victory over evil. Francis was in great love and faith in this sign. “With this seal, Francis signed himself whenever necessity or out of charity, sent a few letters” (FF 980); ”With it gave start to his actions” (FF 1347). The Tau was then the highest score for Francis, his seal, the telltale sign of a deep spiritual conviction that only in the cross of Christ is the salvation of every man.

Hence, the Tau, which has behind it a solid biblical-Christian tradition, was greeted by Francis in his spiritual value and the Holy seized it so intensely and total up to become himself, through the stigmata in his flesh, the end of his days, the Tau which he had so often contemplated, designed, and above all loved.

Nowadays, many Franciscan family members, friars, nuns, seminarians, candidates and professed of the secular Franciscan Order, young devotees, and admirers, and friends of St. Francis, wear the Tau as a distinctive sign of recognition of their belonging to the family or to Franciscan spirituality.

The Tau is not a fetish, nor a trinket, it is a concrete sign of Christian devotion, but above all a commitment to life in the footsteps of the poor and crucified Christ.

Receive the Tau, take it to your heart, it is a commitment to a way of life. The Christian marked with the sign of the cross at the time of his baptism, he must carry the cross, through the inevitable suffering that leads to life, imitator, and follower of Christ, poor and crucified. The Tau should remind us of Christian truth, our life associated with that of Christ on the cross as an irreplaceable means of salvation.

We know this: nothing comes to pass without great sacrifice. We welcome this sign then, let us explain it through the “hope that is in us,” aware that only by clinging to the cross with Him every day we can be reborn, like Francis, a truly new life.

At the time of Jesus, the cross was the conviction of the perpetrators, therefore, a symbol of shame and scandal. The condemned of that era was tied to a pole hands behind his back; arrived at the place of execution, they were hoisted on another stake driven into the ground vertically. The TAU cross of Christ is no longer a symbol of shame and defeat, but it becomes a symbol of sacrifice by which they are saved.

It is a symbol of the dignity of the children of God because it is the Cross that Christ has sustained. It is a sign that reminds me that I must also be strong in the tests, ready to obey the Father and docile in submission, as was Jesus before the Father’s will.

It is usually made of olive wood, why? Because wood is a material very poor and ductile; God’s children are called to live simply and in poverty of spirit (Mt.5, 3). Wood is a material that is flexible, that is easily worked; also baptized Christian must be shaped in this life every day, by the Word of God, to be a Volunteer of His Gospel. Wearing the TAU means you have answered YES to the will of my God to save me, to accept his proposal of salvation.

It means to be a peacemaker because the olive tree is a symbol of PEACE (“Lord, make me an instrument of your peace” – St. Francis). St. Francis, with the TAU, blessed and obtained many graces. We too can bless (see the blessing of St. Francis or Nm.6 0.24 to 27).

Wearing the Habit in the OFS 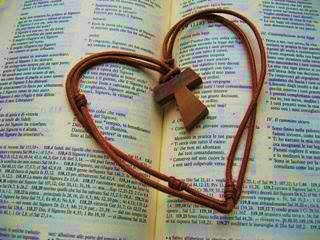